Map of the Magical Towns of México

Map of the Magical Towns of Mexico, for free download and touristic route planning. Updated 2022.

List of the prettiest and most beautiful Magical Towns, which have been able to preserve Mexican history and culture. 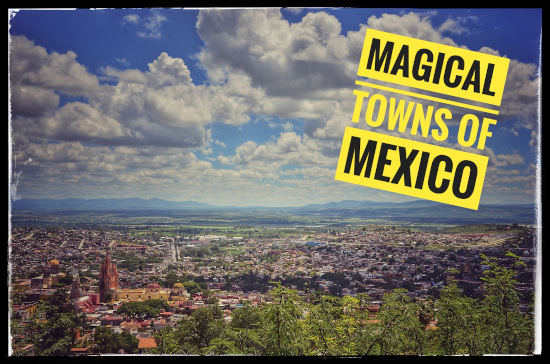 Get to know Mexico through their Magical Towns and discover the country with a short list of small villages which keep, as a treasure, the essence and the magic of the Mexican culture.

The Mexican Secretary of Tourism (Sectur) created the 'Pueblos Mágicos' Program in the year 2001, following the trend started by France in 1982 ("The most beautiful villages of France", "Les Plus Beaux Villages de France") with a big success, originating a list of charming Mexican localities which keep symbols and legends, o where relevant events of the History happened.We sorted the Magical Towns by State, and placed them over an interactive map, so that you can planify your visit. Please click on each one of the villages to know what to do and which places worth a visit.

What can I find in the list of Magical Towns in Mexico?

In the following list of Magical Towns we enumerate all those beautiful little towns that hold cultural jewels, beautiful churches, impressive museums, beautiful streets with polished facades, or beautiful Mexican missions. Thus, you can plan a route through some Magical Towns, such as Bacalar in Quintana Roo, with its famous Lagoon and San Felipe Fort; Bernal in Querétaro, visiting its Peña and its Mask Museum; or Izamal in Yucatán, where you can photograph the Convent of San Antonio de Padua, with its unmistakable yellow color.

Browse the following interactive map, choose the basemap you wish ("National Geographic", "Gray", "Street"), and download the image for free to print it or include it in a document with the planned route of Magical Towns to visit.

How many Magical Towns are there in Mexico?

According to the official data of the Federal Government, in Mexico there are 121 Magical Towns, distributed by all the States of the country. To be included in this exclusive list, the selected towns must meet several requirements, such as creating a tourism development plan in the municipality along with a list of cultural resources and historical monuments, providing geographic mobility data to communicate by transportation with a nearby major city, the existence of a competent tourism authority in the region, and publishing a directory of tourism services in the town. All these requirements are difficult to meet, with which the list of Magical Towns of Mexico is really a very sole selection of locations where visitors can appreciate the authentic Mexican culture.

In addition, the local authorities must work hard over time, with working groups, long-term action programmes, security guarantees, or approval of economic resources by the State and private initiative. There are several towns that want to become a " Magical Town", but they are not able to obtain this prestigious label. Moreover, the federal authorities carry out audits of the Magic Villages, to certify that they continue to offer the best cultural image to tourism.

Undoubtedly, since its creation in 2001, the Magical Towns of Mexico program has become a tourist success for the country, for two reasons. The first is that tourists have an official list of villages they can visit to admire Mexican culture through an official certificate from the Federal Government, thus being able to plan a route when they visit Mexico. The second is that these towns (both those already chosen and those that intend to be chosen) now have cultural and infrastructure requirements that they have to meet, which is a benefit for everyone. The increase of visitors and the growth of hotel occupation in those that have been officially selected as Magic Villages is the guarantee of all this.

What economic support do the Magical Towns of Mexico have?

For some years, the Mexican Federal Government supported the Magical Towns with economic resources through the so-called 'Prodermágico' (Regional Sustainable Tourism Development and Magical Towns Program), which helped with the maintenance of museums, churches, monasteries or workshops for cultural activities, the development of the tourism industry (hotels, restaurants), or the care of the beauty and decoration of streets and facades of the houses.

In 2019, the Federal Government left the 'Prodermágico' program without a budget, and the States themselves, seeing the tourist importance that the Magical Towns have for the regions, began to develop their own schemes of cultural and financial support to these localities. Thus, for example, in March 2019 the Secretary of Tourism of the State of Quintana Roo created the 'Tourism Infrastructure Program', in order to continue supporting the Magical People's facilities of Isla Mujeres, such as its Mayan Observatory or the Captain Dulché Museum.

Politicians also began to debate a new model of federal support for the Magical Towns, with some voices arguing that spending on the equipment, maintenance and security of the Magical Towns was not really an expense, but an investment, due to the benefits that these little towns bring to the Mexican economy. Even the federal government proposes that in the year 2020 the program "Barriendo y Pintando" (Sweeping and Painting) be launched to remodel the Magical Towns that currently exist in Mexico.

Which are the best Magical Towns in Mexico?

It is impossible to mention which are the most beautiful and Magical Towns in Mexico. Choose, according to your tastes, if you want to visit architectural monuments such as churches or Mexican missions, or if you want to enjoy cultural workshops or traditional festivals. Use our list of small villages and plan your route through a specific Mexican State.

What is certain is that the statistics of visits assure that the Magical Towns more visited in Mexico are Real de Catorce in San Luis Potosí, where the tourists visit their Parish of the Purest Conception or the Tunnel of Ogarrio; Cuetzalan in Puebla, with its Sanctuary of Guadalupe and Parish of San Francisco; or Mazamitla in Jalisco, to enjoy its Enchanted Garden and El Salto Waterfall.