All the towns, localities and cities in Mexico, with photos, maps and statistics. Use the search engine or browse the States

Almost 300,000 towns in Mexico have their own space on PueblosAmerica.com with numerous lists of names, maps of magical towns, or statistics on indigenous peoples. 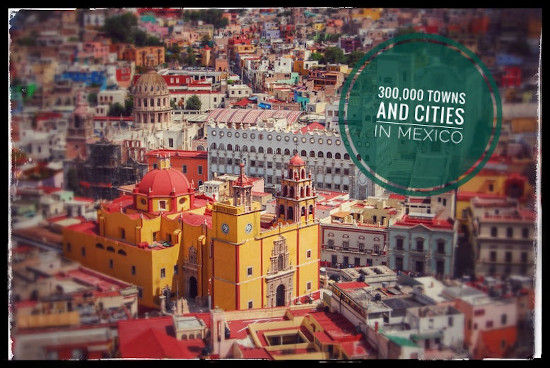 We have created the most complete list of towns and cities in Mexico in the whole Internet, with almost 218,000 official locations, according to Mexican authorities. In addition, we have registered several thousand different localities, totalling almost 300,000 positions. With this list you can admire these towns, the beauty of their cobblestone streets, their facades, their landscapes and, above all, their people. For each one of the Mexican towns we have registered, we show a map of their location, as well as photos or demographic statistics (for example, the percentage of the population that speaks indigenous languages), as well as useful information on hotels or restaurants. Browse through the following list of towns, sorted by state, and locate a small city you want to visit or the small village where you or your ancestors were born.


What are the towns of Mexico?

The towns of Mexico are small localities, many of them villages in remote rural areas, which still keep intact the cultural essence of a whole country, the lifestyle of decades ago, its gastronomy, the decoration of its streets and its houses. It's true that you can go sightseeing in Mexico and visit its beaches, its big cities, or its famous Aztec and Mayan pyramids. But in the small towns you can taste how the Mexicans really are in their daily life, know centennial customs, indigenous languages that endure after thousands of years, and authentic gastronomy at an affordable price. That's why we recommend you to browse the extensive directory of PueblosAmeria.com, with tens of thousands of towns with less than 100 inhabitants, analyze their statistics, see their photos, and thus be able to plan a trip to the center of Mexican culture.

In PueblosAmerica.com we also have an extensive list of the magical towns of Mexico, such as Mineral de Pozos in Guanajuato or the beautiful magical town of Mazunte in Oaxaca, which can be used as a guide to plan a tourist route throughout the country or through a particular State of Mexico. The so-called " magical towns" are small Mexican towns officially chosen by the Federal Government to designate those towns that have managed to keep as a treasure the essence and magic of Mexican culture, and thus promote tourism in Mexico. Every year, the Government updates the list of the "Magical Towns Programme", in order to assure visitors that these towns continue to comply with the established socio-cultural requirements, so that they can enjoy the music, festivals and fairs of each town they discover.

In this link of Magical Towns we have all those localities that have the official seal of Government, and you will be able to discover a complete map with all the magical towns of Mexico, to be able to look at a single glance the location of all of them and thus locate for example the magical towns of Oaxaca, those of Morelos, or the magical towns that are near CDMX. Also, in each magical town you will find a list of things to see (churches, sanctuaries, aqueducts, theaters), as well as photos and demographic statistics of each town.

We have created hundreds of maps of the States and Municipalities of Mexico, so you can locate the towns and cities more easily. In this link with maps of Mexico you will be able to check a complete cartography of each region, with different base images: satellite photos, topographic map, street map, etc. Moreover, you can also download each map free of charge to print it out on paper or include it in a document.

The indigenous peoples of Mexico are the descendants of the original inhabitants of the territory. As can be seen in on this map by municipality, the indigenous population is distributed throughout the country, but is mainly concentrated in the states of Oaxaca, Yucatán, Chiapas, Guerrero, and Chihuahua. If you browse our website, you will find data on the percentage of speakers of indigenous languages in each town or city. For example, in the town of San Agustín el Viejo (Guerrero), 42.73% of the population speaks an indigenous language but does not speak Spanish.

Population statistics of the towns in Mexico

We provide statistical information for all the localities in Mexico. From the most populated cities to the smallest villages. According to our statistics, in Mexico there are 180,000 towns with less than 200 inhabitants, where almost 5 million people reside. And in these small towns where Mexican culture keeps its traditions and customs. Discover through the PueblosAmerica.com directory numerous statistical information (population pyramids, percentage of homes with Internet or washing machine, etc.). We have also collected photos of the users, so you can appreciate the landscapes of every town in Mexico, of its churches, or of its streets. For example, in this collection of photos of La Lagunita (a small town in Zacatecas with 200 inhabitants), you can see its schools, its squares, and its surroundings.

Names of the towns of Mexico

The names of the Mexican towns come from a centuries-old culture, and some are very peculiar, arising for example from popular expressions of the Mexicans. In this list of weird names you can find villages called "Chinches Bravas" ("Wild Beg Bugs") or "El Purgatorio" ("The Purgatory"), where their residents have become famous for living in towns that were baptized with really funny place names. You can also find in this list of towns the names of the towns ordered by letter, so that you can more easily locate that little town or city whose name is familiar to you, but which you do not remember exactly.

Tourism in the towns of Mexico

In PueblosAmerica.com we want to contribute to the economy of each small town in Mexico, and therefore, within the information of each locality, we incorporate data from various businesses established in such cities or towns. For example, with this list of hotels in Palizada (Campeche) or all the places to eat in Chignahuapan (Puebla). With the accommodation, bars and restaurants, tourism is promoted in the small Mexican towns, and thus helps their inhabitants to have a prosperous future in the places where they were born.

Most common surnames in Mexico

Find out about the gastronomy, culture and landscapes of all the towns in Mexico through PueblosAmerica.com, the most complete list in the whole Internet. Visit each of the villages and plan your trip with maps, statistics and photographs. Your next vacation or the search for the location where your parents or grandparents were born or lived can be enhanced if you have a thorough understanding of the rich culture of Mexico's towns.